Chemical Residues Matter: How Some Disinfectants Can Affect Your Surfaces and Health

The CDC Now Says to Wash Surfaces with Soap and Water—Why?

According to the CDC, “There have been increases in poisonings and injuries from unsafe use of cleaners and disinfectants since the start of the COVID-19 pandemic.”  One of the most common health concerns is over residues these chemicals leave behind. Misuse of cleaning products can actually make you sick.

Whether the goal is to decontaminate a highly sensitive biolab or to disinfect a simple office desk, when it comes to cleaning surfaces consider what gets left behind by the materials that are being used. Just as a paper towel can leave bits of paper residue on a surface, so too can a cleaning agent like your everyday spray. If not properly washed off, these residues can, over time, cause harm to the surfaces they are left on and/or even accrue grime, germs etc. leading to areas that are potentially worse off than when they were initially “cleaned,” and pose serious health risks to people.

Matter that remains after some chemical or physical process has been completed is residue. Essentially, anything left behind on a surface after cleaning is residue. Not all residues are the same, but you can generally fit them with in one or both of these two categories:

Some residues can be clearly visible and look like a clear film, a smudge, smear, or even look like grime depending on the chemical makeup of the product and their usage. For example, certain bleach products may leave behind salt residues which are visible to the naked eye. The second type of residue is microscopic leaving it effectively invisible to the naked eye. Despite being impossible to see, this kind of residue can still cause visible issues, such as corrosion. Another type of residue is one that is sticky, tacky, or slippery when touched and may or may not be so easy to spot, causing it to fall within both categories. Even when used properly, some wipes will leave surfaces feeling sticky.

The Chemicals in Your Residues

The chemical composition of certain disinfectants and cleaning products can be a direct cause of residue, as in with:

On the other hand, there are some products, such as chlorine dioxide, which might not just leave their own residues, but may include other additives that are then mixed with other active ingredients such as quats or ammonium chlorides and leave a combined residue that is both sticky and corrosive.

Damage and Harm Residues May Cause

A litany of potential problems. Different types of residues create their own unique short- and long-term issues.

In 2020, News Channel 6 reported multiple fire departments in Orange County, Florida, halted usage of devices they had purchased because they felt the chlorine dioxide solution used in the devices was contributing to “rust and pitting on metal surfaces.” 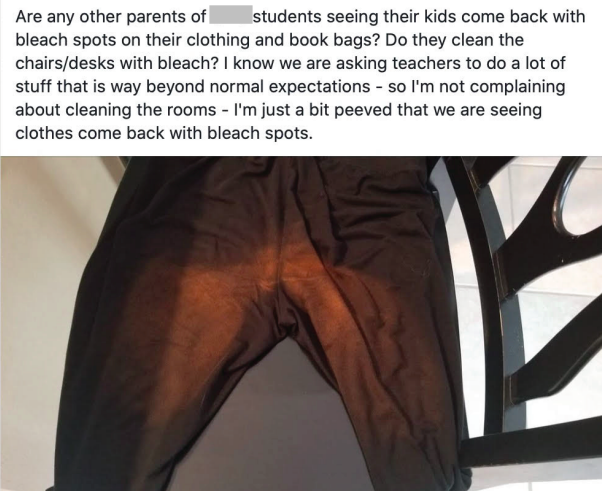 In March 2021, Dow High School students in Michigan had their clothes bleached by the Vital Oxide compound used to disinfect classrooms. The Midland Daily News reported administrators believed the problem was due to improper application of the product. Teachers commented about the strong smell associated with the product saying, "when we came back in January, I noticed a strong scent that the spray had. I might have just gotten used to it. For the first week, it was very strong." While the affected children were concerned about their clothes, parents, on the other hand, were worried about potential health risks. One parent went so far as to say, "My son's concern was the discoloring. But my concern as a parent is the actual chemical itself."

These concerns aren’t unfounded as several studies show that residues can create health issues. Residues can create sticky microscopic traps that encourage the growth of germs and other microscopic critters. Germs can become resistant to cleaners and disinfectants when they are exposed to the products this way. For this reason, it is important to not only choose products that do not leave behind harmful residues but to properly train staff on application.

Eliminate Residues or Choose a Product Without Them

Perhaps the easiest way to eliminate residues is to ensure directions are followed for proper application directions. Check the back label and double check the instructions to help protect your surfaces and, more importantly, your health. Recognize the difference between rinse and non-rinse cleaners—a simple once over with water can make all the difference when it comes to eliminating residues left behind from rinse cleaners.

CURIS System offers a disinfection option that mitigates the challenges and issues found with most disinfectants and delivery systems. CURIS does not leave behind harmful, sticky residues that build up to form 'films' and might harbor germs: you don't need to wipe surfaces after CURIS disinfection fogging. Additionally, CURIS is free of chlorine, ammonia, and bleach that might cause damage to your surfaces.

Our patented 'dry' fog leaves nothing behind but thoroughly disinfected surfaces.

Cleaning and Maintenance Management: "The Hidden Hazards of Cleaning Residues"